Gameplay would be radically different that the gameplay in traditional Team Fortress games. Many unrealistic elements, such as Rocket Jumping and the Minigun, would be removed. Weapons would be based on those in real-life, such as the M16A2 and FAMAS. In addition, classes roles were to be more distinct; Medics would only be able to heal and revive allies, not attack the enemy base.

Because of the emphasis on realism, tactics used in real-life, such as suppressing fire, would need to be utilized if a team wanted to win.

The most significant change was to be a command system. In this system, there would be an invisible player called the Commander that would issue orders to the players on his team. This class would have a complete view of the map and could issue orders on the fly via text or voice chat.

Players would also have to get into squads, which would be lead by a player in a special class known as the Officer. He would generally lead an attack and would affect a player's morale. The higher the morale, the faster and more accurate a player is. This was done to encourage players to get together and move in teams. If an Officer were to die, the player's morale would reset back to zero.

Teamwork would be emphasized via combination. In addition to the previously-mentioned morale system, there would be other ways to make two or more teammates work together. For example, if there was a mounted machine gun in a map, one player could fire it. However, if another played got next to it, then the gun would fire much faster because the other player would be feeding ammo to it.

There would also be a limited amount of lives for each player, depending on the map. For example, Robin explained that one of their maps only gave a person one life; if that person died, he would've had to wait out the rest of the match.

Vehicles would play a role in the game, mostly as dynamic spawn points. They would also be parts of objectives in maps. Earlier builds had drivable vehicles, but this was scrapped so that the team could focus more on fine-tuning classes.

Map objectives were to be much more varied; in some maps, you team was supposed to blow up or defend an objective, such as a bridge. Some previews mention flags as well, which might've meant that CTF would've returned.

Design-wise, amps were generally going to take place in canyons (like Badlands), the Middle-East and Italian-themed areas. Some early screenshots also show an urban area, but later screenshots do not show it. Most of the Italian textures ended up being used in Team Fortress Classic maps, such as Avanti.

One of the ideas used was that maps would be part of a greater storyline that the player could progress through.

Middle-Eastern setting.
Add a photo to this gallery

The HUD was planned to be radically different that the TFC HUD. A live summary of what is happening would be shown scrolling on a part of the HUD like a news ticker, so as to keep the player informed. If the player is a Commander, then the news ticker will show the results of his commands.

A big part of the HUD would be a new navigational system. There would be a compass that would always point the player to the current objective. In addition, the map-maker could add waypoints that would show the player exactly where to go. One of the rumored abilities of this system was that if the Commander issued a new order, the game would dynamically change the compass and waypoints so that it'd lead to the new objective.

The only communications that would be shown is text and voice commands from your squads. This was done to reduce the amount of chat spam in large servers.

None of these HUD elements have been seen in screenshots. Some early shots showed a new HUD, but it seemed to display exactly the same information that the regular TFC HUD did. Later screenshots completely discarded the new HUD in favor of a direct copy of the TFC HUD. One of the last screenshots released for this build showed a green version of the regular TFC HUD.

The Green TFC HUD.
Add a photo to this gallery

TF2 was to use a variety of new technology, such as a system called Parametic Animation. This would mesh various animations together so as to appear more realistic. Take TFC; if a person dies while jumping, he would somehow slump to the ground while in the air. In TF2, Parametic animation would make it so that the a person killed while jumping would go limp in the air, and would finally slump when he hits the ground.

There was also to be voice communication via microphones. In addition, the player's character model would open and close his lips while talking.

The game could also dynamically change the amount of polygons on models, depending on the player's settings. If a large squad of enemies were to attack the player, all model's polygon counts would decrease so that the player can fight them off without lagging. When the enemies disappear, the computer will bump the poly count back to the previous amount.

There were to be 12 classes in the game; two more than the ten in the classic games. Most of the original classes reappeared, but were significantly altered so as to make them realistic.

The Marine would be the basic class and is obviously a realistic Soldier. He would have an automatic rifle and a rocket launcher. 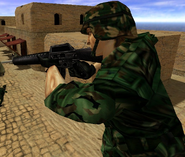 The second Marine design.
Add a photo to this gallery

This class is essentially a "realistic" Heavy. Instead of a Minigun, he would wield a light machine gun. Otherwise, he is the same as the classic Heavy.

Add a photo to this gallery

He would be the same as the classic Sniper, but he could blend into environments if he stood still and didn't move for a certain amount of time. 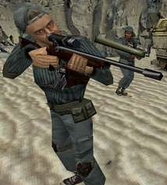 The Sniper.
Add a photo to this gallery

The Commando is essentially the Demoman; he would be used to destroy things, such as vehicles and buildings. 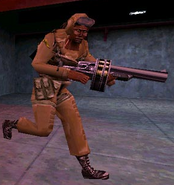 The Commando.
Add a photo to this gallery

As can be guessed, the Flame-thrower is actually the Pyro. The only announced change is that his flamethrower would look prettier.

The Flamethrower.
Add a photo to this gallery

The Officer would be a new class. As described earlier, he would increase player's morale and could lead the charge. To help him start an attack, he would be equipped with IR Goggles and a smoke grenade.

This class is obviously the Scout. He would be used to flank and distract enemies while his other teammates would attack enemies from the front. 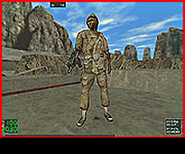 The Ranger.
Add a photo to this gallery

The Field Medic is quite different from the classic Medic. His only ability would be to heal and revive teammates. He would not have equipment suitable for attacking enemy bases. 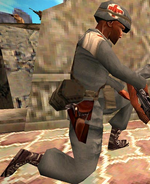 The second Medic design.
Add a photo to this gallery

The Engineer (possibly originally called Medium Infantry, referring to the 360-degree view of the Medium Infantry model) would be very similar to his classic counterpart; he could build Sentries for defense. However, these Sentries can be moved around without destroying them, which would be useful for making sure that enemies don't get to certain areas, such as the front lines, without having to build the Sentry at the spot. An unlimited amount of Sentries could be built, but the Engineer would need sources of Energy in order to build them. He can build these sources, but enemies can destroy them.

Engineers could also build fixed-emplacements, such as mounted machine guns. These would be much closer to the classic Sentry Gun than the previously mentioned Sentries would be, but they would have to be used by players.

The Engineer.
Add a photo to this gallery

The Spy would be similar to the classic Spy. He would have an instant-kill attack that would be done when he attacks the target's back, but it would be a piece of wire that would choke the enemy to death, not a backstab with a knife.

His disguise system would be a bit different; instead of selecting a disguise from a menu, he would have to kill an enemy in order to look like him. If an enemy doesn't make a sound when killed, then his disguise will not appear.

The Spy.
Add a photo to this gallery

The Instructor is actually a bot that would teach the player how to play the game.

The Commander was to be the most important class in the game. He would be able to see through team members' eyes and Engineers' cameras, as well as see entire map, issue orders on the fly and control squads and groups.

There were to be a variety of weapon in the game; most of the based on weapons in real-life.

Screenshots show that there were two automatic rifles in TF2; the M16A2 and the FAMAS. Interestingly, the FAMAS is only shown in a first-person screenshot. All other shots show the M16A2. The M16A2 could also be possibly a placeholder worldmodel for the FAMAS. 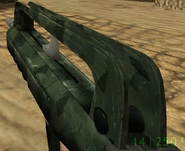 The M16A2.
Add a photo to this gallery

The Uzi can be seen used by the Spy and Field Medic.

The Uzi.
Add a photo to this gallery

The M249 would be used by the Machine Gunner. It would have to mounted on sandbags in order to be effectively used.

The M249.
Add a photo to this gallery

The Sniper Rifle would be like the classic Sniper Rifle, in that is the ultimate long-range weapon. However, it is unknown if it could be charged or if it would slow down the user while zoomed in.

The Sniper Rifle.
Add a photo to this gallery

The Grenade Launcher.
Add a photo to this gallery

The Smoke Grenade is only available to the Officer class; it would create smokescreen that would make it difficult for enemies to see where the player and his squad would be coming from.

The SMAW is a one-shot rocket launcher used by the Marine class. It would be used to destroy armored objects, such as vehicles. It would create exhaust from its behind, which would damage any nearby enemies. It would also have to travel 20 meters before being armed and would have a very large blast radius. Because of the emphasis on realism, there would be no way for the player to rocket jump.

Emplaced Machine Guns could be built by Engineers. These heavy machine guns would be used to create covering fire for allies. If an ally where to stand next to the gun while it was firing, then it would fire much faster.

The M2 fixed machine gun.
Add a photo to this gallery

The Sentry Gun would return, but an unlimited amount of them could be made and they could be transported anywhere via Engineers.

The Sentry.
Add a photo to this gallery

TF2 was eventually scrapped. However, some of its features ended up in later Valve games. Some examples include:

After this version of TF2 was scrapped, a new version of Team Fortress 2, Invasion, was built on the Source engine, which put a major emphasis on real-time strategy aspects.

Retrieved from "https://teamfortress.fandom.com/wiki/Team_Fortress_2:_Brotherhood_of_Arms?oldid=17752"
Community content is available under CC-BY-SA unless otherwise noted.