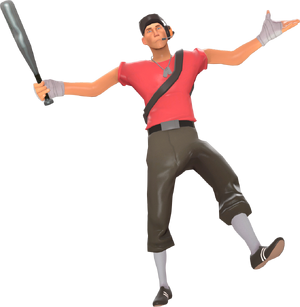 "Next time eat a salad."
―The Scout's final words to an angry Heavy

Each class has its own series of taunts. These can be performed using default key: G for the PC and OS X, X for the Xbox 360, Right Bumper for the Sixense/Razer Hydra Motion Control and Square for the PS3, with most weapons possessing their own unique animation and dialog line(s), though some taunts may be shared between similar weapons. Several lines of dialog are chosen at semi-random during a taunt, with one line being chosen at random and every line after it following a specific order. Taunts are generally used for gloating purposes after killing an opponent, to celebrate a victory, provoke living opponents or simply for comedic effect and for the most part have no direct effect on game-play. However, certain taunts have effects such as Healing the player and his teammates, stunning, damaging, and usually killing opponents. Taunts that kill enemy players are known as "Attack taunts" or "Kill taunts". Several achievements also require the use of taunts. Although taunts can be used during Humiliation and Stalemate, related achievements are not awarded. Caution should be exercised when performing a taunt; while a player performs a taunt, they are left vulnerable and the view shifts from first to third-person, leaving the player unable to act until the taunt is concluded (though Demomen are able to activate their Stickybombs while taunting).

Taunting cannot be performed underwater or while airborne. The effects of knockback will instantly cancel any taunt. All taunts, including Kill taunts, can be successfully performed while stunned.

A minority of weapons, such as the Scotsman's Skullcutter, Engineer's PDAs, Jarate, and Sapper, all lack taunts. The Heavy's food and Scout's drinks function as both a consumable and taunt when activated, moving the player into a third-person view. While the Heavy's consumable taunts activate upon pressing the taunt key, the Scout's consumables only activate upon pressing the primary fire key. All weapons that have been released in "Community" updates do not have unique taunts, instead using a pre-existing taunt or nothing at all.

On servers with the variable tf_allow_taunt_switch set to 1, it is possible to switch weapons after pressing the key to taunt, but before the taunt animation actually plays. This results in a character performing the taunt for the weapon being used before pressing the taunt key, but holding the new weapon. This behavior was originally a glitch that was unintentionally "fixed" in the Mann-Conomy Update, and later made into a server side option at community request. Setting this variable to 2 results in the ability to switch weapons at any time during the taunt. With the variable set to 0, any attempt to switch weapons will result in the player instantaneously switching back to the weapon used for the taunt.