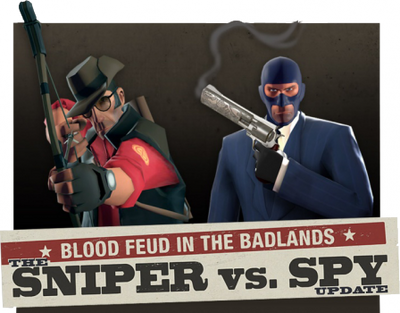 "You've met the Scout, the Soldier, the Demoman, the Heavy, the Engineer, and the Sniper. Then, for some reason, a sandwich. But now it's time to meet the stealthiest, shiftiest, most secretive, suit-wearing TF team member of all... ...again..."
―TF2 Official Blog

The Sniper vs. Spy Update was the first two-class patch and the fifth major content pack released for Team Fortress 2.

Initially at the center of the update was the Sniper class, and the day by day progress went smoothly. An announcement on Day 4 revealed that the Spy would also benefit from the update. Each class was given three new weapons along with achievements.

Retrieved from "https://teamfortress.fandom.com/wiki/Sniper_vs._Spy_Update?oldid=8947"
Community content is available under CC-BY-SA unless otherwise noted.