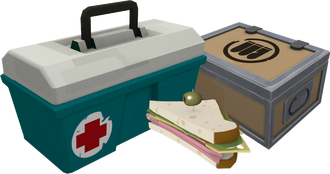 "This thing looks bloody useful."
―The Sniper on useful items.

Pickups are objects that are spawned or dropped in various locations across most maps. These usually consist of varying forms of Health, Ammo and Metal. A player must walk into them to collect them, and will only pick them up if they are not at full Health, Ammo or Metal. Any regular item pick-up used in this way will disappear, and will respawn after ten seconds with a distinct sound effect.

In addition, the Heavy's Sandvich can also be considered a pick-up item, in the sense that a Heavy can drop his Sandvich for his teammates or enemies to use. It can recover as much health as a medium-sized health kit. When a Heavy is at full health, he can pick up a health kit to instantly recharge his Sandvich if it has been depleted.

The Scout may also drop small health packs whenever they receive a kill or assist with the Candy Cane. Health pickups, excluding the Sandvich, and Ammo/Metal pickups do not restore a set amount of health or ammo/metal; instead they restore a percentage of the maximum health or ammo/metal of a class.

Pickups cannot be retrieved if an Engineer builds a teleporter on the pickup spawn point. Other engineering buildings, such as the Sentry Gun and Dispensers, allow friendly players to pass but block enemy movement, so they can be used to prevent opponents from taking pickups. However, such buildings also block the builder from claiming them.

Retrieved from "https://teamfortress.fandom.com/wiki/Pickups?oldid=13291"
Community content is available under CC-BY-SA unless otherwise noted.