Team Fortress Wiki
Register
Don't have an account?
Sign In
Advertisement
in: Meet the Team, Sniper vs spy Update

[A bell rings out in alarm. The Administrator's voice comes over the speakers as a large sign board lights up.]

Administrator: "Intruder alert! A RED Spy is in the base!"

[Camera pans down to show a BLU Soldier reading the sign board.]

[Soldier grabs his shotgun off a gun rack and runs down the stairs.]

Soldier: "We need to protect the briefcase!"

[Camera moves to BLU Scout pulling on a door handle. Soldier pushes him out of the way and enters numbers into the keypad.]

[A BLU Heavy runs towards them and the door from behind.]

[Heavy runs into the Scout and Soldier, breaking down the door with Sasha, his minigun. Heavy runs towards the briefcase, knocking Scout and Soldier over in the process. Scout crawls up from the floor, while Heavy lowers his gun.]

[Camera pans to behind Heavy. There is a BLU Spy holding a BLU Sniper over his shoulder. The Sniper is dead.]

[Spy adjusts the corpse of Sniper and walks towards the briefcase.]

Spy: "I see the briefcase is safe."

[Scout and Soldier stand up.]

Spy: "Tell me, did anyone happen to kill a RED Spy on the way here?"

[Scout shrugs, Heavy and Soldier look at each other and then back to Spy.]

Spy: "No? Then we still have a problem."

[Spy tosses Sniper's corpse onto the desk, showing the Sniper still has a Spies knife in his back. A sharp musical cue plays.]

Scout: "Ooh, big problem. I kill plenty of Spies. They're dime-a-dozen back-stabbin' scumbags. Like you! Ow. No offence."

[Scout takes the butterfly knife out of Sniper's back, spinning it around before cutting his finger and dropping the knife. He puts the cut in his mouth.]

Spy: "If you manage to kill them, I assure you, they will not like me."

[Spy spins the knife much better than Scout, fancily closing it and handing it to Scout, who takes his cut out of his mouth.]

Spy: "I am nothing, nothing, like the man loose inside this building."

Scout: "What are you? President of his fan club?"

[Soldier laughs behind Scout. Spy walks over to the windows next to the desk.]

[Spy turns back to Scout.]

Spy: "That would be you're mother!"

[Spy brings out a Manila folder. He slams it against the desk, and it has "TOP SECRET, SCOUT'S MOM" written on it. Multiple images of the RED Spy and BLU Scout's mother being intimate fly out of the folder and onto the desk. The camera shows us close ups of three of the images.]

[Scout, Soldier and Heavy all look at the photos. Scout with confusion and anger, Soldier with interest and Heavy mostly uncaring, but a little shocked.]

Spy: "Indeed, and now he is here to f**k us! So listen up, boy, or pornography starring your mother will be the second worst thing that happens to you today."

[Spy grabs a cigarette from his case, Scout looks like he is ready to attack Spy, Heavy and Soldier are trading the images of Scout's Ma.]

[Scout begins to collect the images, taking them from Heavy and Soldier. Spy takes a drag from his cigarette and looks out the window at a map of the world.]

Spy: "The Spy has already breached our defenses..."

[The camera changes to show the RED Spy running along a hallway. He hides behind a rock quickly, before tossing a Sapper at a BLU Sentry, destroying it, and shooting the Engineer.]

[The Engineer falls through a door, dead, and the RED Spy shoots something off camera.]

[Cut back to the three BLU's in the intel room.]

Spy: "You've seen what he's done to our colleagues!"

[The camera pans down to the deceased BLU Sniper before fading into this Snipers fight with the RED Spy. The Spy raises his knife, ready to backstab, but the Sniper hears him and defends himself with his rifle. The Spy kicks him into a wall, where Sniper grabs his Kukri, attempting to attack the Spy. The Spy dodges, but gets a slash on the Snipers left cheek. Sniper goes in for the attack, but Spy gets the best of him, backstabbing the Sniper. His body falls through the wall onto the ground below. Fight sounds are heard throughout the scene.]

[Cut back to the three BLU's.]

[Cut to the RED Spy fighting a BLU Medic. Spy gets a hold on him and disguises himself as the Medic. The disguised Spy hits the Medic, causing his glasses to fly into the air, and for the real Medic to fall to the ground, assumed dead. The Spy grabs Medic's glasses mid-air and puts them on.]

[Cut back to the three BLU's.]

[Spy looks at the camera, but is cut off by his head being blown off. Soldier reloads his shotgun after shooting his teammate. Scout and Heavy look on in surprise. The images and the folder Scout was holding flies into the air.]

Soldier: "What? It was obvious! He was the RED Spy! Watch, he'll turn red any second now."

[The camera shows Spy's foot, and Soldier nudges it with his shotgun.]

[The camera changes to show Heavy and Soldier, who are crouching next to the Spy's body. They do not notice when the BLU Scout changes his demeanor to be much more unaffected by the murder of his teammate. The Scout looks around the room, to make sure no one is watching.]

[The camera changes again, to be following the BLU Scout as he un-flicks the knife, slowly approaching the unsuspecting BLU's.]

[The Soldier and Heavy are unaware as the BLU Scout uncloaks and turns out to be the RED Spy. The Spy lifts his knife, prepared to backstab both of them.]

RED Spy: "Right behind you."

[Both Heavy and Soldier gasp and turn to see the Spy.]

[Team Fortress 2 ending flourish music plays. The sounds of the Soldier and Heavy being murdered can be heard during this.]

[French music plays as we zoom out on a pile of the images seen earlier. The RED Spy, holding the briefcase, moves some out of the way, and grabs a specific one of him and BLU Scout's Ma standing together holding hands. He picks this one up very carefully. He smiles at the sight of it.]

[The Spy stands up, and walks away.] 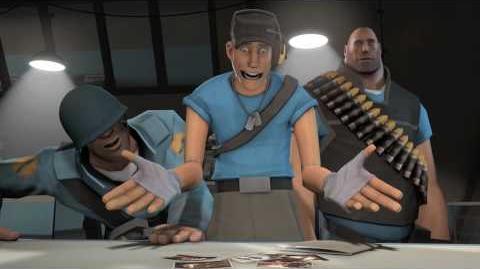