When the video starts, there is a shot of Pyro walking towards what appears to be a town. Once the establishing shot is over, it cuts over to the RED Heavy giving his opinion on the Pyro , saying Pyro "scares him". We then get a better look at the town, which in reality, is a BLU team base. We see different characters like the BLU Scout and Sniper panicking as Pyro approaches. Pyro breaks in to a house holding his flamethrower, where the BLU Demoman was hiding. The scene then cuts to Spy talking about Pyro's horrific thoughts, and that "one shudders to imagine what inhuman thoughts lie behind that mask." Pyro is shown burning down the town, and the camera zooms inside his mask, revealing how Pyro sees the world, a magical place full of candy and bright colors, or "Pyroland." He sees his flamethrower as a machine that produces rainbows. To Pyro , the BLU team all look like winged babies. He runs up to a baby Heavy with a giant lollipop, and right before Pyro gives it to him, the scene cuts back to reality, revealing he was killing a BLU Heavy with a fire axe. Back in Pyroland a baby Scout flies up to him. Pyro blows bubbles in his face, to which the Scout laughs, but the scene quickly jumps to the real world again, where Pyro is shooting a BLU Scout with his Scorch Shot. (To be added)

The word that Pyro Said, can be hear if you really can hear what he said, not only like mmpphh! 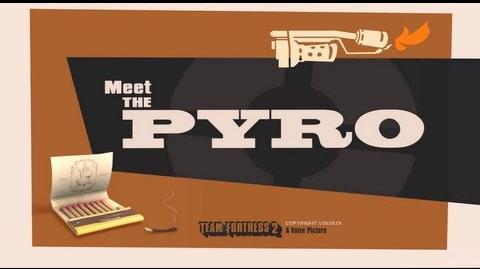