[Demoman wheels his wheelchair and Scout runs, as Scout trips and falls to the ground.]

Scout: "WOAH, WHAT THE FU-" [gets hit by four missiles, landing him on the medic's glass wall. One of Medic's doves looks at Scout.] "Medic.."

Medic:"When the patient Woke up, his skeleton is missing, and the Doctor was never heard from again!"

[Medic laughs alone. Half a second later, Heavy laughs with him as he slaps his hand on a tray knocking away the tools on it.]

Medic: "Anyway, that's how I lost my medical license [he chuckles, and a dove bursts out of heavy's chest.] Archimedes, no! It's filthy in there!" [He wipes his hand on his vest and looks at Heavy for a second, who looks a tad offended,] "Ugh, birds." [He chuckles and grabs the heart implant.]

Medic: "Now, no heart can withstand this voltage, but I'm very certain your heart-"

[Heavy's heart explodes, and remains knock one of Medic's doves off their perch.]

Heavy: "What was noise?"

Medic: "The sound of progress my friend."

[Medic goes to his fridge.]

Medic: "Where was I?, There we go..." [Sticks heart onto a voltage meter. Places it to where the Medigun is pointing and the heart beats faster.]

[The violin/string instrument in background gets faster in sync with the heart.]

[A flash of light explodes revealing the screen.]

[The big heart is Übercharged, as it glows red with red-orange glows that look like silhouette cracks flowing.]

Heavy: "Should I be awake for this?"

Medic: "Heh, well, no. But, as long as you are could you open your ribcage for me? I can't seem to-"

[As Medic and Heavy hold open Heavy's ribcage, they hear a loud crack and Heavy screams and reveals a rib in his hand.]

[Medic takes the rib and throws it away. Turns around and talks to Archimedes.]

Medic, whispering: "No they don't."

[Medic takes the mounted Medigun and brings it closer to Heavy. His organs and such all regenerate including his shirt and vest. Heavy smiles. There is a faint red glow in Heavy's chest, but it fades quickly.]

[As Medic dresses up and equips his tools, a drum plays in the background. He comes out of a door with shining light behind him and his doves flying out. The TF2 Soundtrack, MEDIC!, starts with the choir harp.]

[As Medic comes out, Heavy runs forward and Demoman rushes towards Medic in a wheelchair and wrapped in bandages. Other members of RED are either hiding or hurt badly. Scout is on the ground, trying to stand, while Engineer and Sniper are hiding behind a rock. A wave of BLU Soldiers rushes toward them in the background.]

[Demoman gets hit with a rocket sending him flying and landing near Medic. Medic pushes his glasses up and flips a switch on the Medigun, then aims it at Demoman healing him. Demoman gets up whilst removing his cast and bandages. He then quickly nods at Medic and heads back towards battle. Medic spots Scout on the ground and goes to heal him as well. Scout gets off the ground, healing his (most likely broken) nose, his black eye, and he regrows his tooth.]

[Scout springs back up grabbing his baseball bat and runs. He hits a soldier with it around a corner.]

[Heavy is hiding behind a rock with and an army of Soldier's wearing different cosmetics advancing towards him.]

Heavy, yelling: "Doctor! Are you sure this will work?"

Medic, yelling back: "Heheh, I have no idea!"

[Medic flips a few switches on his Medigun revealing a voltmeter that goes to Übercharge. He aims it at Heavy while he gets out of cover.]

[Heavy turns red with a glassy/shiny texture while the camera shows his heart pumping fast and is redder than usual.]

[Heavy walks towards the army shooting his minigun. A couple of rockets hit him and covers the screen in smoke.]

[Out of the smoke appears two glowing yellow eyes and fully reveals Heavy in his Übercharged state while walking forward.]

[Heavy and Medic walk forwards while it shows Sniper and Engineer hiding behind a rock showing surprise to Heavy's invincibility. Medic and Heavy both advance while Heavy mows down the enemies while absorbing their rockets.]

[It then shows the feet of the soldiers when they run towards Heavy and Medic with many falling.]

[Heavy and Medic climb a mound of corpses, Heavy specifically stepping on a Soldier wearing the cosmetic 'Armored Authority.]

[The music crescendos as they climb up and it keeps its pitch when they reach the top. At the top Medic is posing in front of a glowing light while Heavy is slightly below him and to the right of the screen mowing down more enemies. Medic removes his beam from Heavy, but he is still Übercharged.]

[Cut to most of the team sitting outside of Medic's Lab, waiting for the Übercharge implant. Engineer is playing his guitar quietly, Spy is checking the time, Soldier is standing at attention, Pyro is reading something while flicking their lighter, Demoman is drinking and Sniper is sleeping.]

[Medic is muttering something outside the room.]

[The ticket counter outside the Lab goes from One to Two as Scout pushes open the door, his chest glowing red with the new Übercharge implant. Medic is seen in the room cleaning the chair.]

Scout: Ohohoh, man! You would not believe-" [He pauses briefly,] "-how much this hurts."

[Something inside Scout's chest coos like a dove. Scout looks down at his chest in confusion.]

[The first few seconds of The Art of War plays. A quote from PC Gamer appears: "The most fun you can have online." Shortly after, two strands of text appear after one another; "is now free." then "Forever." After that, the TF2 logo appears with the words: "FREE TO PLAY!" underneath.]

[Another initial drum from The Art of War plays along with the website for Team Fortress 2: "www.teamfortress.com".] 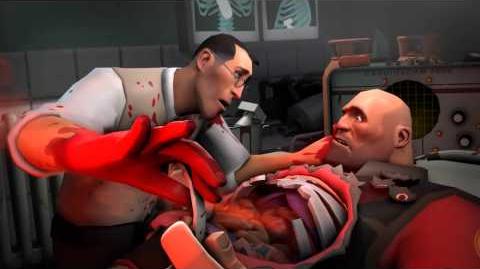