Primary fire (default: MOUSE1) launches a quick, short-range fireball projectile that travels 3000 Hammer Units per second (roughly 128 mph), and inflicts 25 damage as well as setting enemies on fire for a short time. The fireball deals 300% damage to burning players and increases the repressurization rate by 50% upon hitting an enemy. Alt-Fire (default key: MOUSE2) airblasts and decreases the repressurization rate by 50%. This weapon is capable of inflicting Afterburn to enemy Pyros for just long enough for the next shot to count as being against a burning enemy. 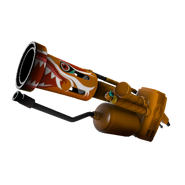 Festive
Add a photo to this gallery
Retrieved from "https://teamfortress.fandom.com/wiki/Dragon%27s_Fury?oldid=17550"
Community content is available under CC-BY-SA unless otherwise noted.