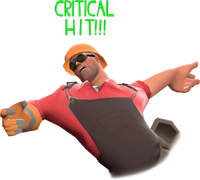 Critical hits, also known as "crits" or "full crits", are attacks that do extra damage and have distinctive sound effects when fired and upon hitting a target. Players on the receiving end of the attack will have the words 'Critical Hit!!!' (or 'Mini-Crit!' in yellow, respectively) appear over their head in green letters, accompanied by a loud ding.

Critical hits can be easily distinguished from normal hits. Most melee weapons have a unique swinging animation. Explosive projectiles, such as rockets or stickybombs, have a team-colored glow and sparkle effect. Bullets have team-colored trails. These visual affects are accompanied by a crackling electric sound upon firing.

Self-inflicted critical hits will not deal critical damage to the user, but will still play the sound effect.

Critical hits deal three times the base damage of the weapon and ignore both the distance modification and the random damage modification of normal shots, though explosive weapon crits still suffer from splash damage fall-off. As a result, weapons that are normally merely nusiances at long range (such as Miniguns) can become dangerous when critting. The extra damage is of the "critical" type instead of matching the weapon's original type, meaning it cannot be resisted by the Vaccinator or Upgrade Station buffs - though Upgrade Stations do sell an independent "crit resistance" buff, which reduces the extra damage.

Crits and mini-crits do not stack in any form - that is, meeting multiple conditions to earn a crit or a mini-crit will not deal any more than regular critical damage. For example, the Frontier Justice's revenge crits do not deal any additional damage when the Engineer is ÜberCharged by the Medic using the Kritzkrieg, while attacking an enemy under the influence of both Jarate and the Fan O'War will only result in a single mini-crit. This means that team co-ordination is required if multiple players have ways to increase their crit output, or extra damage will be wasted. If both a mini-crit and full critical hit occurs with the same attack, the critical hit overrides the mini-crit.

If the 'Display damage done as text over your target' advanced option or hud_combattext 1 console command has been enabled, the 'Critical Hit!!!' text will not be displayed. The damage dealt will be drawn in a larger font instead.