The Caltrop is a primary grenade in the Team Fortress series. When the "grenade1" key is pressed, the caltrops are primed for one second, then released. Approximately six caltrops are released at a time. If an enemy (or the person that releases them) touch a caltrop, they take damage and their max speed goes down. The speed penalty can be removed by a Medic or a Medkit.

It is only used by the Scout and was added into the Team Fortress games in QWTF 2.8. In there, it is the Scout's primary grenade by default. Those who prefer the Flash Grenade can switch to it by setting the variable "old_grens" to "on". The default value is "off".

This grenade does not exist in ETF.

The Caltrop is very useful when you need to get a target off your back. Tossing a few caltrops generally make enemies think twice about pursuing you. In addition, if the pursuer touches the caltrops, he will be slowed down enough for you to get away from him with ease.

Caltrops are also useful for stopping enemy offense enough so that your defenders can take them out. Find a spot that enemy attackers often walk on, then toss some caltrops on it. This will usually force them to take an alternate route, which gives your defense enough time to get ready for when they come out of another route. If you're feeling daring, you can run right up to the enemy attackers and toss a few caltrops right in front of them so that they are forced into walking on them. IF they don't have a Medic, their slower speed makes it easy for your defense to take them out. 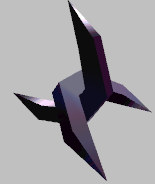 The TFC Caltrop.
Add a photo to this gallery

Retrieved from "https://teamfortress.fandom.com/wiki/Caltrop?oldid=17635"
Community content is available under CC-BY-SA unless otherwise noted.