The Brass Beast is a community-made primary weapon for the Heavy. It is an antique machine gun made almost entirely of brass, bearing resemblance to the original 1861 Gatling gun made by Richard J. Gatling with a number of modifications. This weapon has a 20% damage bonus, and has the same firing speed as the minigun,(10 units of ammo a second). The Minigun deals about 500-550 damage a second, and the Brass Beast does about 600-650 also when the gun is spinning the user has 20% Damage Resistance. As a drawback, the weapon take 50% longer to spin up, and you move 60% slower while the weapon is spun up, it makes you target for Snipers but they will have also a hard time killing you unless full charge shot thanks to the damage resistance. The spinup time is about 2 seconds. This weapon excels at defense due to the increased damage, and fits in also with the slower movement speed. This weapon is also very effective if a person jumps off a small building while spinning up the minigun and onto a enemy, as the spin-up time will be significantly shorter upon landing. 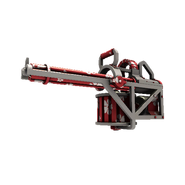 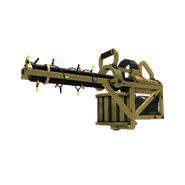 Festive
Add a photo to this gallery
Retrieved from "https://teamfortress.fandom.com/wiki/Brass_Beast?oldid=17536"
Community content is available under CC-BY-SA unless otherwise noted.